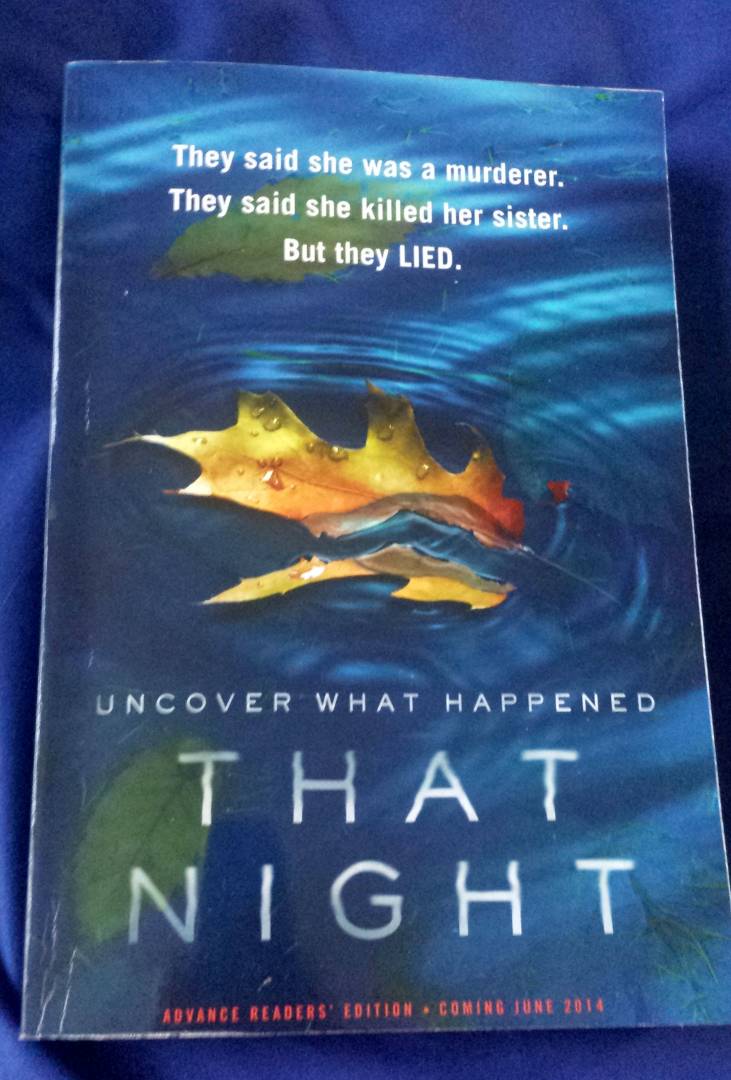 I just finished reading a great book that I want to share with you guys. It’s called That Night by Chevy Stevens, and it kept me on the edge of my seat until the end!

I normally stay away from modern, mass-market murder mysteries in lieu of old-school authors like Agatha Christie and Stephen King. I feel like new murder mysteries are all really similar, predictable and cliche. But my mom read this and enjoyed it, and since we have similar tastes in books, I decided to give it a try.

The book follows Toni Murphy, a girl in Canada who is wrongly convicted of her sister’s murder. When Toni is just 18, her sister Nicole is brutally murdered. As Toni and Nicole didn’t get along, and Toni was the last person to see her alive, Toni and her boyfriend Ryan were convicted of her murder. It’s pretty sketchy that the police don’t take the time to look for any other suspects?

The book switches back and forth between the time period when the murder takes place, moving forward to the point where she goes to jail; and the time period when Toni is in jail and eventually released on parole. The 2 stories collide midway through the book as we gain a better picture of what happened that night.

Toni and Ryan spend 17 years in jail for a murder they didn’t commit, and even when they are released on parole, things don’t just get to go back to normal. The lovebirds are banned from seeing each other ever again and from talking to anyone involved in the case…so how will they find out who really did it and clear their names?

This book is really depressing, as it follows a lot of negative themes. Toni is bullied in high school by these girls Shauna, Cathy, Kim and Rachel. Shauna used to be Toni’s best friend but turned against her over a guy. From beating her up to setting her up to get in trouble, Shauna makes Tonis’ life hell. Eventually she becomes best friends with Nicole, turning Nicole against Toni, so Toni is alienated even from her sister.

Another problem is that Toni’s own parents don’t believe that she is innocent. Her mom won’t speak to her at all, except to yell at her and accuse her of murder. Her dad makes a big effort, but it is clear that he is still on the fence about what he truly believes.

Nicole suffers from many problems, none of which she can tell Toni about, and is always going about her life looking over her shoulder in fear. Her parents think she is the greatest thing since sliced bread, so she has no trouble sneaking out of the house, dating older guys, drinking and doing drugs at age 16 and then pinning everything on her sister.

Toni endures a lot of hardship through the prison system as well. In order not to be a victim, she has to be tough and win some fights. You’re either feared or fearing in prison. This doesn’t help her stance with the guards or administrators, though, as they see her as a problem. But you can’t tattle on someone in prison, or worse things happen to you. Wherever Toni goes, people are trying to make things hard on her, simply because they are bored and they can.

The book also explores how we judge people based on their appearance. Toni wears jeans and t-shirts, lots of blacks, combat boots, and eventually tattoos. Her punk-rock appearance makes people think that she is a problem kid, even though she is a good person who does well in school and tries to always do the right thing. Nicole, on the other hand, gets into far worse trouble but is able to easily get out of it because of her sweet, innocent, girly appearance. This is a huge problem for how we see and treat people in society – you truly can’t judge a book by its cover.

I really enjoyed reading this book. I usually read dystopia books, scary books, books about pirates and academic texts on World War II. This was a huge branch out of my literary comfort zone, but I’m glad I did it. I didn’t know or understand much about what it’s like to be in prison, what it’s like to be wrongly convicted of a crime, the judicial system in Canada, what it feels like to be unjustly and permanently separated from the love of your life, what it’s like to live in a small town, and more. And I was on the edge of my seat the entire time.

Overall, this book is a good read. You’ll turn the pages so fast as you try to figure out whodunnit, you’ll learn a lot and you’ll be surprised at the end. What more can you ask for in a book??