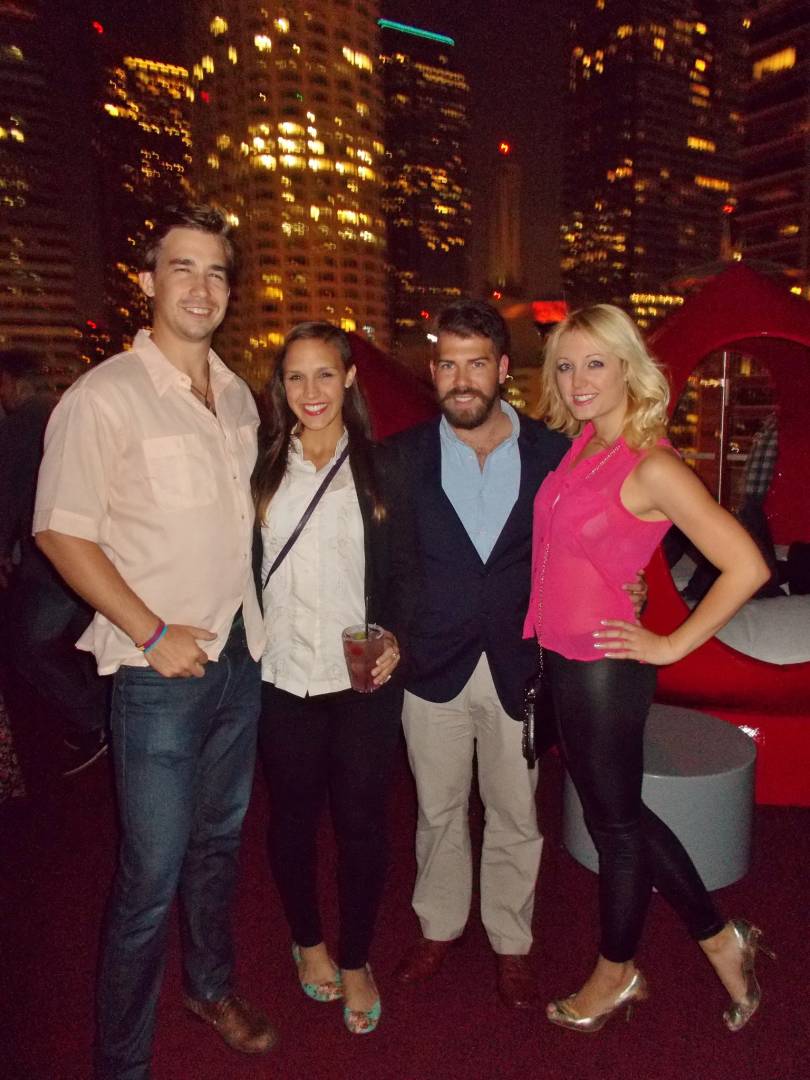 If I had to name my #1 favorite nightlife spot in Los Angeles, and that would be very difficult to do given all the amazing bars/clubs/lounges around here, The Standard Hotel Downtown Los Angeles would definitely be it.

The Standard is part of a chain of hotels run by hotelier Andre Balazs in Downtown LA, West Hollywood, Miami and New York City. Each of the individual hotels is similar, but have their own distinct personalities and cultures.

The Standard Downtown LA is an expensive hotel that makes no claims of being classy. From giant black foot statues to in-room bathrooms with no walls to packs of condoms with stick figures having threesomes on them, the Standard is unabashedly young and pop-culture.

The rooftop is no different. When you emerge from the elevator onto the 15th floor open-air rooftop, you’re immediately greeted with unicorn hedge animals, pounding club music (usually from a live DJ) and drunk girls in cocktail dresses and men in suits everywhere. The glimmering rooftop pool is lit up electric blue at night, and a tile above the pool has a cartoon Space Invader on it (yes, like the 90s video game). Skyscrapers tower above the rooftop, making you feel like you’re in an oasis, and they gaze down upon big red onion-shaped things filled with waterbeds. If you’re lucky, people will get drunk enough and start getting down on the built-in dance floor – these nights are always the best.

There’s a bar on the rooftop serving up $18 cocktails, but the best part of the rooftop is definitely the German Biergarten. Located steps below the pool, the Biergarten is lined with hedges and strung with red and yellow bulby Christmas lights. Here you can purchase cups, steins or even boots of German beer on draft. You’ll also find the Jagermeister, giant soft pretzels with spicy brown mustard and German sausages. This is the only place where food is served on the roof, unless you arrive early enough in the night to be waited on in the entryway tables. The beer here is delicious, and a liter of beer will set you back only $16. A much better deal than the cocktail bar! The atmosphere is also different. There are shaded tables and chairs, a ping pong table and a foosball table.

Once you’ve gotten you beer, head back out into the main bar area for some iconic photos. Standing by the pool is a good one, in front of skyscrapers is a classic and rolling around in a waterbed pod is a fun one too. People will always be willing to take your photo, and they’ll probably want one in return. It’s no tourist shame to post an Instagram photo tagged at the Standard!

Nighttime at The Standard is always a blast, but I really love the weekend pool parties during the summer. They’re always run by different organizations, but they’re really all the same. Show up early, pay not-too-much cover fee, take tons of photos, hang out in your bathing suit, drink too much beer, listen to great music, go for a swim, get a tan. Recently I attended a 90s-music-only pool party and it was pretty much the greatest thing ever. 80s and 90s hip-hop is my favorite genre of music, and there’s nothing quite like hearing an entire pool full of people singing loudly to Backstreet Boys? “Tearin’ Up My Heart”.

This weekend, check out the Standard for yourself! Beware – there is a $20 cover on Friday and Saturday nights, but not any other nights. I’d visit on a Thursday night – free to get on the rooftop but still a weekend-y vibe. Or hit up a pool party – make sure to get there before 1 p.m. to avoid long lines. And bring sunscreen!