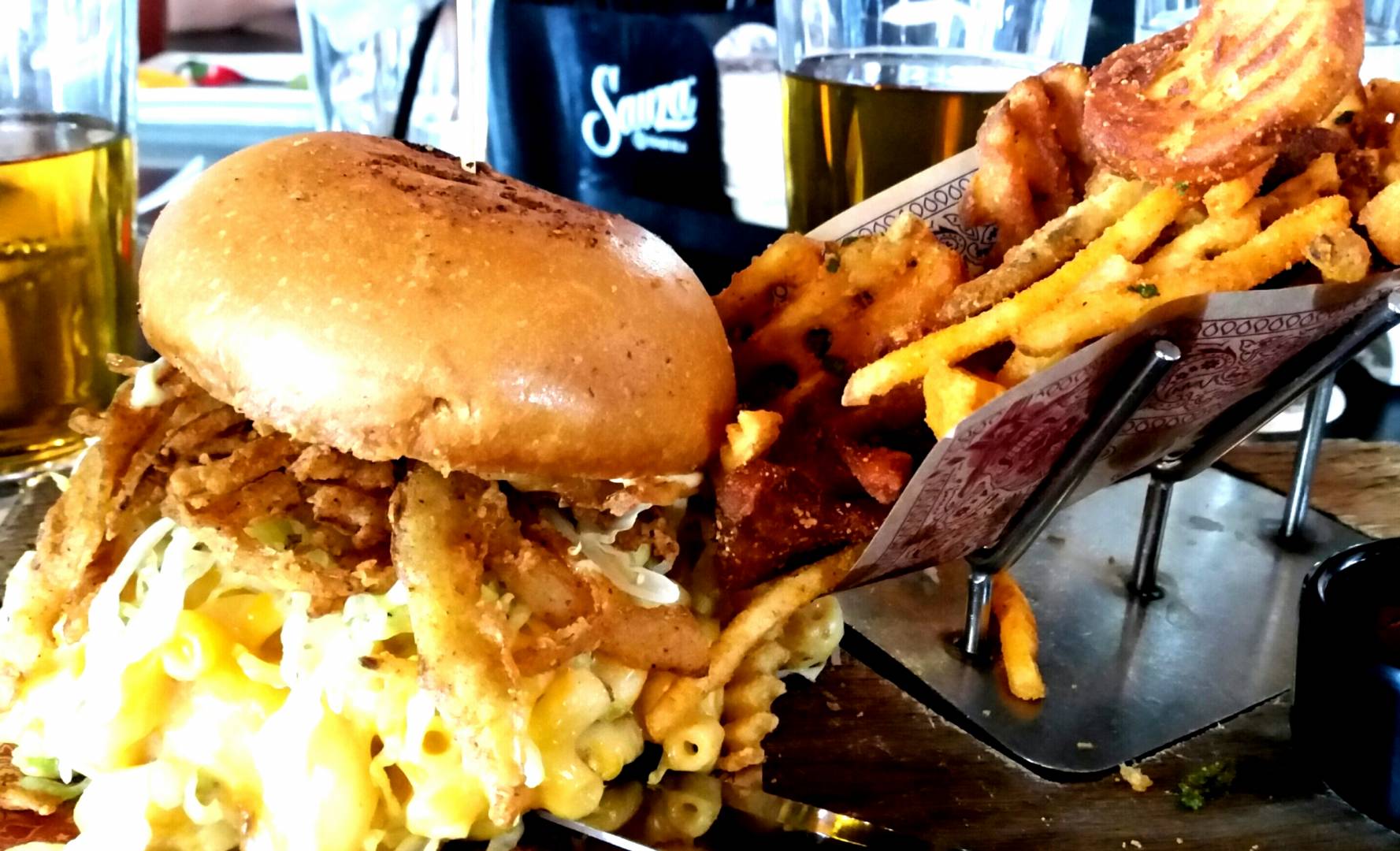 I know that Guy Fieri is the biggest joke in the culinary world. And why wouldn’t he be? He’s known for a reality TV show, his food is glorified junk food and he’s got a super-outgoing personality that is easy to make fun of. That being said, who doesn’t love watching Diners, Drive-Ins and Dives? And who doesn’t love yummy junk food? That’s why I love eating at Guy Fieri establishments and I ask you not to judge me until you try it for yourself!

My first Guy Fieri experience was in Las Vegas at Guy Fieri’s Vegas Kitchen & Bar, located in the LINQ Hotel Carnival Food Court. When you are hungover, nothing sounds as good as a (veggie) burger and fries dripping with grease and cheese. No one in my group had ever eaten Guy Fieri food so we stopped by. My friend Cindy asked,”What is Guy Fieri’s food like”? Pointing to the menu and reading off the first thing I saw, which was a marble cheesecake topped with potato chips, pretzels and melted fudge, was the best way to describe what she was getting herself into.

When I saw the Bacon Mac-N-Cheese Burger, I just had to have it in and around my mouth. Unfortunately, for some reason Guy Fieri does not offer a veggie burger???!!! So I ordered this burger without the burger…and without the bacon. Still, I got a huge pile of six-cheese macaroni and cheese in between a garlic buttered brioche bun, topped with super-melty cheese, donkey sauce, lettuce, tomato onion and pickle. It was a sight to behold and one of the most delicious things I’ve ever eaten.

Before booking this Vegas excursion, my squad had already booked a Carnival cruise to Ensenada, Mexico. To our utter delight, we found out that Guy Fieri has a cafe on board! Guy’s Burger Joint serves up burgers and fries all day – and the best part is, food is included on Carnival cruises, so you can eat as much Guy Fieri as you want and not break the bank. You will get fat and maybe have a heart attack, but you will NOT have to pay! It’s paradise.

Due to the astonishing and disappointing lack of veggie burger (??!!) I ordered a grilled cheese. Although this sounds plain, the toppings bar does not disappoint. You can put your own ranch, chipotle mayo, mustard, crispy onions, mushrooms, lettuce, tomato and pickles on the burger and customize it however you like. Again, pure and utter paradise.

So, while you drool over these pics, remember that a crazy celebrity chef is behind these concoctions and maybe don’t be so quick to judge. Now, who wants to donate their liver/heart/arteries? I need a replacement.