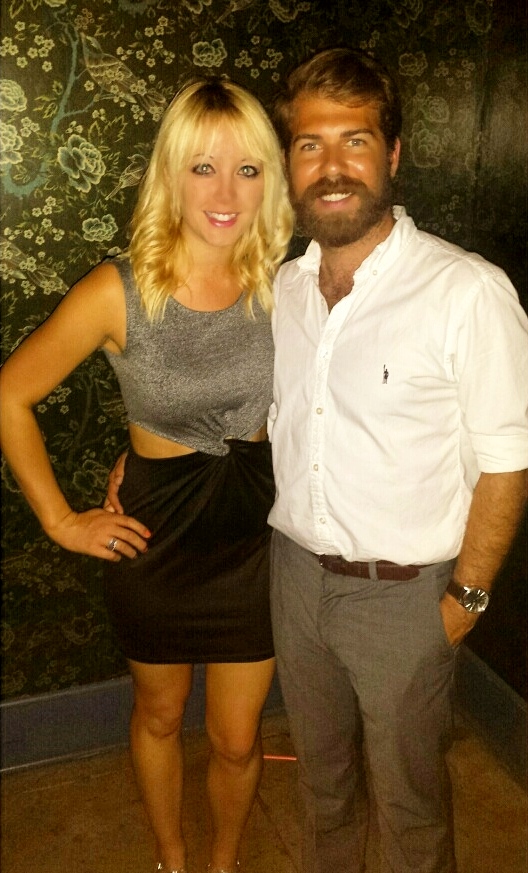 After living in Downtown LA for 5 years (and 7 years, respectively), my boyfriend Ramsay and I have decided to move to the westside! We’re super excited for a new neighborhood and new experiences, and to be closer to the beach. But at the same time, we’ll really miss Downtown.

Over the years, Downtown has grown from being a dangerous slum where only heroin addicts, homeless people and bankers ever ventured to becoming a true center of LA. With offices, historical building, new shopping, fine dining and world-class bars, Downtown is now the place to be – just as we’re moving away!

So before we leave town Ramsay and I decided to hit up a few of our favorite bars one last time. Read below for stories and pics of our adventure, and maybe you’ll discover a few new favorites of your own!

After pregaming a bit (hey man, drinks in LA are expensive!) we took a Lyft to Library Bar. Library Bar is one of Ramsay’s favorite spots Downtown. He loves the atmosphere – chill and dark, surrounded by books (even if they aren’t real, and if it is too dark to read them). I’m not such a fan of Library Bar, because I don’t really like standing around and drinking, and there is nothing else to do here. But I had a beer and hung out. We got here a little early, so it was practically deserted until we left – always a nice thing.

At this point, I was pretty hungry, so the search for food began (this is never easy in Downtown. The only places are high-end sit-down restaurants, or are not open on weekends). We headed to Public School 612, which is coincidentally attached to my favorite restaurant in Downtown, The Daily Grill – but that is another blog post for another day.

I had been fiending deviled eggs for a while, so I ordered some at Public School. They were delicious and unique, and they were happy to make them without the prosciutto that they usually come with. Ramsay ordered the Brown Bag Fries, which come in a paper brown bag with ketchup and mustard. The entire bar is set up to be like a school, with composition notebook menus and college-rule lined paper cocktail menus. The atmosphere is pretty neat, and they even have a real-live dartboard in the back. I’m not sure giving drunk people super-sharp darts and telling them to aim them correctly is a good idea, but hey, it always makes for a fun night!

Next on the list was Casey’s Irish Pub on 6th and Grand. Anyone that loves a true Irish bar will love this place. They serve Guiness, Jameson, and Guiness mixed with Jameson. Seriously, they will mix Guiness with everything – their cocktail menu is almost entirely Guiness. Btw champagne + Guiness is not very good, just as you would suspect.

But the true star of Casey’s is their Pickleback shots. I am NOT one for shots – ask anyone who’s ever gone out with me ever – but I do love pickles. And there’s just something about the way Jameson whiskey mixes with the pickle juice in your mouth and that makes the result smooth and yummy. On weekends, Casey’s has live music. Hearing a harder rock’n’roll band play REM’s “Losing My Religion” was a pretty neat and unique experience. On other nights they have Irish rock bands, game nights and more.

Lastly, it wouldn’t be a trip Downtown without visiting Honeycut. If you’ve been keeping up with Diaries of a Domestic Diva, you’ll know that Honeycut is my favorite place in all of LA (you can read all about my love for it HERE). If you’re new here, Honeycut is an underground disco dive bar that plays 80s and 90s hip-hop, disco and electro-funk with cocktails on draft, shooters and a light-up dance floor. So it’s basically the coolest thing ever. Seriously, check it out. But get there before 10 – otherwise you’ll be in line forever. On this particular night, we waited over an hour. But the wait is always totally worth it!

What places are on YOUR Downtown bucket list? What do you think of Library Bar, Public School 612, Casey’s Irish Pub and Honeycut? Let me know in the comments!