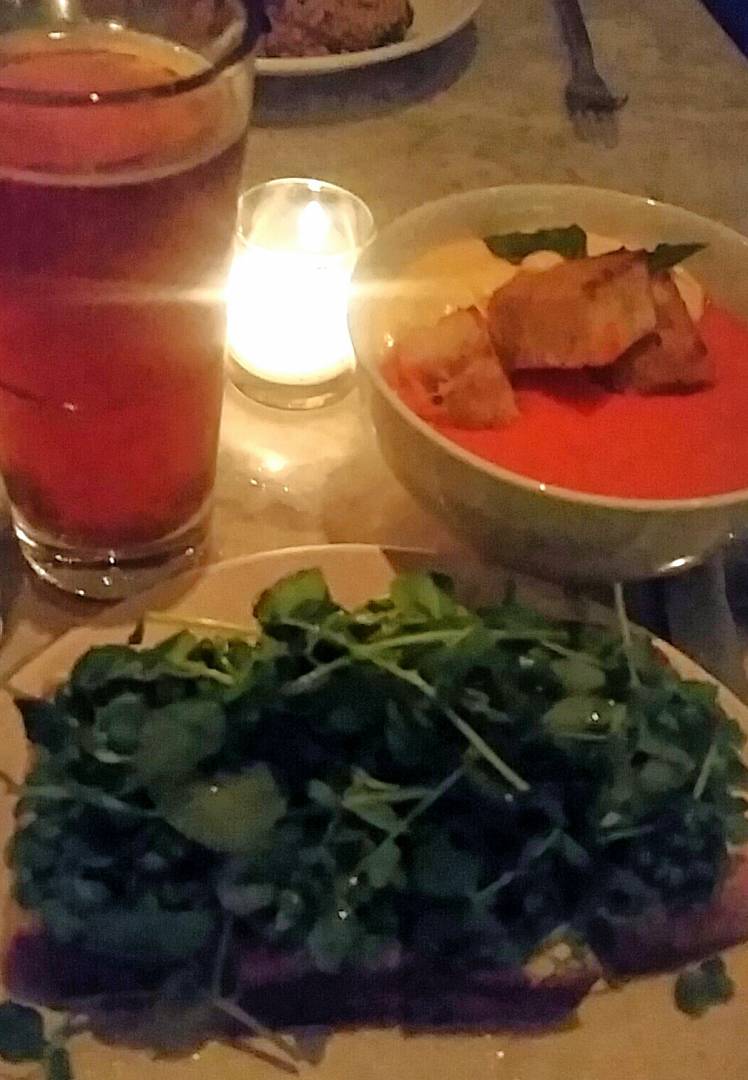 I’ve often driven by Salt Air on Abbot Kinney in Venice but never stopped in. On this occasion, though, I was glad I did!

Salt Air is known for their fresh seafood and has been acclaimed as a top restaurant in the area. As a vegetarian, I wasn’t sure what kind of veggie food would be available to me at a seafood restaurant, but I was pleasantly surprised with the options.

I wasn’t hungry enough for an entree, so I ordered two sides. I’ve heard rave reviews about the pea toast at Salt Air, so that was my first decision. My second order was the tomato soup. 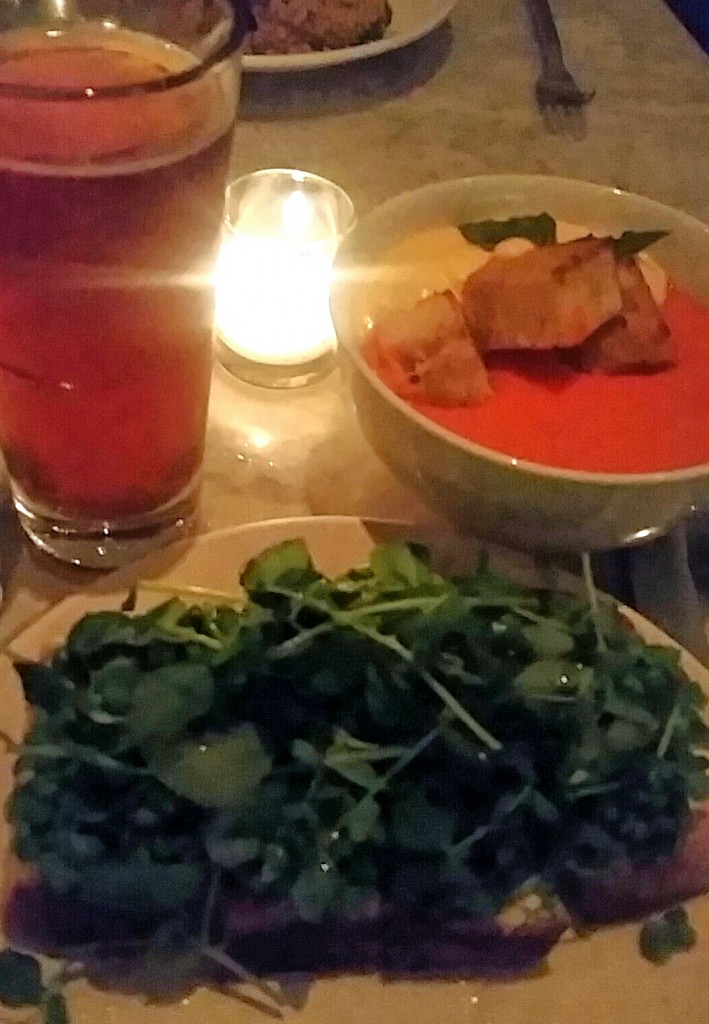 The pea toast is just as good as its reputation would suggest. These four massive slices of toast arrived, absolutely covered in a pea mash. Underneath is sourdough bread, ricotta cheese, olive oil and caramelized onions. The pea mash is made with a jalapeno for a spicy kick, and the toast is topped with pea leaves (not cilantro, like I originally thought). You can make your own at home HERE.

There is so much toast on this plate that I would have been totally satisfied with this as a meal. However, I still had the tomato soup to tackle.

The tomato soup was thick, creamy, homemade and fresh – really perfect. It’s topped with cumin croutons and basil for a kick. My issue was with the sharp cheddar foam. This foam is so funky – it’s a cream sitting on the side of the bowl that you mix in with your soup as you go – but it’s spicy as all hell. I was not expecting this, and I am not a fan of spicy food. In fact, spicy food makes me pretty sick. I carefully ate around the foam, but sometimes got a bite of it, which set my mouth on fire. If you like spicy food, this is definitely the dish for you. If not, I’d recommend asking the chef if he’d mind serving it without the cream.

The beer selection at Salt Air is lacking, which is incredibly surprising given its location smack dab in the middle of craft microbrew beer central. They only have one IPA which shouldn’t even qualify, due to its insanely lacking amount of hops. Their pale ale (Strand Brewing Co”.24th Street Pale Ale)?is pretty hoppy though, so I would choose that instead.

Another con is the lack of seating room – the dining room is so crowded, and the tables so close together, that you might as well be eating at communal tables. Although a crowded dining room is usually a good sign – it means that the food is good and the restaurant is popular!

However, the staff at Salt Air is so incredibly nice, friendly, knowledgeable and helpful that overall the experience is an amazing one. They really set the tone for a pleasant dining experience and the food seals the deal. Definitely check out Salt Air next time you’re in the area – they even have valet.